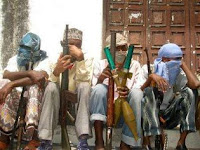 So, I predicted like 2 months ago, that Ethiopia was going to invade Somalia, and 2 months later they are already leaving after throughly whipping the rag tag Islamic court's armed forces. Ethiopia, is following the Powell doctrine (exit strategy in war). Looks like the influence of the American occupation of Iraq is playing a role in the swift removal of Ethiopian troops.

The European Union has pledged something in the line of $15 million Euros to pay for the deployment of an African Union Peacekeeping mission. But of course, those Islamists have to make things stupid. The 100 or so rebels left have actually decided that they are going to fight the African Union peacekeepers, and try and kill them. Looks like we are in for more trouble in the horn of Africa. Not good . Lets hope this part of the world is fixed and European and Africa influence can bring peace unlike the Islamists, and the American war lords have.
Posted by Jamie Callingham at 6:31 p.m.