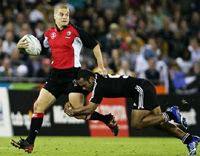 Ah, looks like my favorite sporting event of the year is only 9 months away, i am already debating whether or not to try and make my way to France to watch Canada battle in the world cup.

Canada qualified this past summer by hammering the Americans, by about 50 points in what was the finest display of rugby ever seen in Newfoundland and Labrador. Canada's team played with passion and fire, and also totally displayed that they can run with the ball and play with finesse.

Canadian Rugby is known for its big hits, big hits, and its ability to overpower its opposition, and beat them into submission with hard tackling. Canada has had a reputation at this event for playing with passion, and power, even reaching the quarter-finals in 1991. The Canadians were inspired by visiting Vimy Ridge before their quarter final. Where they lost to then world champion New Zealand All blacks 24-10, and were given a standing ovation by the crowd in France.

What I love about the Rugby world cup, is that it always lives up to the hype. Unlike the soccer world cup (fake injured Italians, acting like they get shot if an opponent comes withing a foot of them) or the superbowl (half-time show better than game, players on weekend pass from jail). The sport is actually front and centre. The blood is real, the scrums are real, and tackles are spot on. The players are characters too, especially the hookers.
Posted by Jamie Callingham at 1:22 a.m.

How do I add your blog to my blog scroll?