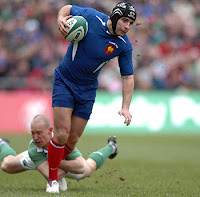 It's not the provincial election. Its the Rugby World Cup!

France Versus Argentina kick off the pool games in what expects to be an awesome opener between 2 of the best scrummagers in the world. This world cup could be a coming out party for both Canada and Argentina who hope to make it to the quarter finals, are confident and ready to show the world that the western hemisphere is ready to play.

World Champion's England look like also-ran's and the English people believe that their World Cup chances rest on their performance against the mighty Springboks of South Africa in a pool match to decide their fate in the tournament.

The perennial favorite's, the New Zealand All Blacks come into the the tournament with huge expectations, they haven't won the trophy in 20 years and have the hopes and dreams of New Zealand resting on their shoulders. They might choke, they did in 2003, and 1999, maybe just maybe they will win this year.

That leads to the hosts, France. They won the European 6-nations championship this year, and beat England in warm up matches. The French will play to huge partisan crowds in Marseilles, and Paris, and in other sports, the French often rise to the occasion at home. My prediction is for a New Zealand-France final.

The games are available on Setanta sports, I just found out Rogers is continuing their preview till next Friday, so enjoy the live matches.