13 Billion Dollars, and still no directions or leadership 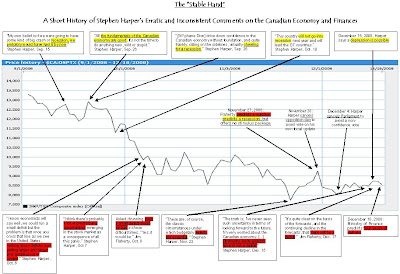 The Tory financial disaster has escalated and continued. For a refresher, check out this chart of doom, as done by a Liberal activist in December, documenting the fall, and fall of the TSX in regards to statements made by the Federal Conservatives in regards to the economy.

Just when you thought things could get worse, the Parliamentary Budget Officer has come out with a report today stating that the deficit should be somewhere in the area of $13 billion. This is an insane amount of money and really shows that you cannot spend money like an NDP socialist, and cut taxes like a Republican. This has created a budget crisis without any economic stimulus package for the economy to get started. Why did this happen do you ask? I have some theories.

1) Tories are more concerned with the green shift than the economy. Yes, they focused all their energy on attacking the Liberals last election than on fiscal restraint

2) Tories play Canadians for patsies and use GST cuts to give working class Canadians the impression, they are saving money, when the real beneficiary, is the rich guy buying a new yacht for 800 grand.

3) The Tories economic policy is based upon a dart board and throwing darts at it blindfolded with each square, some type of pork barreling project or tax cut that creates no real impact on the economy.

4) The Conservatives have hired the recently unemployed Trailer Park boys as economics advisors.
The Tories have fallen asleep at the wheel, and the economy is now a runaway truck down a huge hill in terms of budget deficits. This Government has acted inprudently and acted and spent like a spoilt teenager with their parent's credit card. The media has given Harper and his cronies a free ride as they have mismanaged the tax payers money, and have mortgaged the country so they can spend more money and try to hold onto power.
This money could have been used to fund day care for Canadians, improve infrastructure, or even as stimulus, but instead the mismanagement has created a Mulroneyesque budget deficit. This is history repeating itself. Canadians have to ask themselves, can we trust these people with our money. I don't think so, but judge it for yourself.
Posted by Jamie Callingham at 2:24 p.m.

Really does illustrate that the Harper Tories should rename their party The Denial Party...

How on earth can your MP trust these people to level with Canadians when the shit really hits the fan?

"The Conservatives have hired the recently unemployed Trailer Park boys as economics advisers."

Now that's a little harsh. The Trailer Park Boys would be better then the Conservatives!!!

At least if they were, they would ensure the public has a trailer to live in by using the proceeds from drug sales.

Sorry but putting Conservative and Trailer Park Boys in the same sentence is so absurd it makes me laugh.

"This is an insane amount of money and really shows that you cannot spend money like an NDP socialist, and cut taxes like a Republican."
Heads up, the first govt - whether federal or provincial, and whether Conservative, liberal, or NDP, was -
drum roll please -
Saskatchewan's Romanow NDP government was the first government to record and get out of debt/deficit government after taking over the reins of power from the corrupt conservative govt of Devine in 1991.
Also, another heads up is this little tidbit not widely reported and not widely known but is shown by drilling down into these online documents Department of Finance's Fiscal Reference Tables web page.

NDP governments do better than any other party as fiscal managers.
Only New Democrats have a better performance record of provincial and territorial governments for the past 21 years (looking at surplus/deficit numbers). NDP govts kept the books in the black 48% of the years they governed while Cons kept them in the black for 41% and Liberals kept the in the black ONLY 23% of the time. Of course I won’t forget to mention that Tommy Douglas and during recession times kept Sask. in the black, balanced the budget 17 times, and brought in public health care to boot.
So for past performance reasons here – New Democratic governments have the best financial records, and liberals should be ensuring that they form a coalition govt with the party who actually has a "proven track record" of fiscal prudence and "spending" in areas that the MAJORITY of Canadians prefer.

Forgot to add - great chart. Shows the decline of the cons - congame, and that the emperor has no clothes.