Canada and the World afternoon session

So far the panel is fairly interesting. The emphasis of this group is on NGO's and how they work at representing Canada around the world. To be honest I lost interest in this panel because it reminded me too much of a "me me me" panel.

Unfortunately, I will be missing Michael Ignatieffs speech as I have to go to the airport. bad timing for a Sunday. Post mortem to come later on.
Posted by Jamie Callingham at 1:51 p.m. No comments:

Canada and the digital world

Here are some random thoughts and observations from my spot on press row. The question line for this topic is much longer than any other. Highly appropriate considering the nature of this conference. This session hasn't turned into a parody of buzzwords and technobabble, it has very wide scope,and the questions have pushed the panel all over the digital map.

My impressions of this group is that it is a very technologically driven group, and the consensus view is that Canada needs a national strategy for broadband, and for content in a digital world.

The digital divide will hit Canada hard, unless they develop a strategy to improve our internet situation, a digital strategy so to speak, rather than making accessibility. The issue is that Canada has been left behind in terms of connectivity,and that we need to be innovative.

Copyright
They tiptoed around copyright, taking a view that one shouldn't make laws on the go, I find that people are far too afraid about making big changes in copyright legislation. Just look at music industry and its problems.

Sheridan said that we should have clear national goals for digital economy, and that broadband is a ticket to future prosperity and be able to deliver cultural strategy

Andre stated that its very important to celebrate an encourage our creativity, and the propensity of Canadians to create and government support the ability to create content, and we need to combine institutions and agencies in creature of culture, Minister of Culture and Communications necessary. Bringing together various levels.

Glen to conclude, Government action needs to be defined in a free market to citizens rather than consumers. Base judges and actions based on citizenship. Cultural strategies geared towards inclusive citizenship.

That's all for today.
thanks
-Jamie
Posted by Jamie Callingham at 2:51 p.m. No comments:

Issue of devolutionis up,panelists not sure about power of the territories, Dan Gagnier dwels on the amount of hydro electric energy that is untapped in the north due to the lack of royalties offered to the aboriginal population. Hydro companies should form partnerships with these groups.

The political football in the room is the carbon tax, and Phelps handles in interestingly, and is more nuanced tothe issue. Dan then talks about the implementation of the carbon tax, and how it must be brought in. I feel that a carbon tax is inevitable if people are logical rather then emotional about this issue,.

In a nutshell, carbon should be taxed in a revenue neutral fashion, that the cap and trade system is more for making money, and that other parts of the world have already done this. In all honesty I found that this conversation was extremely adult, and nonpolitical, It was from a purely practical standpoint,and I found it very interesting. The panel brought a diverse group of questions and comments. Is the carbon tax a political football? I don't know, I should ask people outside this room.
Posted by Jamie Callingham at 1:38 p.m. 1 comment:

its around 1pm and the afternoon session and Sheila Watt-Cloutier is about to take the stage. She will be talking about the future of the arctic and its people. But the 3 flat screens all say Energy, which is the next event.

There have been 12000 visitors to the Canada 150 website to view the webcast. i am sitting behind the cameras,next to some regular big time media reporter dudes, and some fellow bloggers here enjoying the festivities.
Posted by Jamie Callingham at 1:03 p.m. No comments:

Having just recently arrived from the aiport, I have just arrived in the blogging area at the conference. it is empty except for a blogger from the msm. Fist impressions of the conference has to be connectivity. I have never seen a conference so wired up top to bottom on the internet.

You think CBC would have interns...

That would have found this video, and put it on air farce, 22 minutes, the Rick Mercer Report. This is hilarious and bizzare.

Its that time of the year again, OYL AGM time, the time when my blog gets a lot of traffic from University dorms and libraries. Let me begin my story with this. This morning I received an email from David Valentin, the outgoing OYL student Director. Here it is in its full context.
Here is David's Letter.
I want to make you aware of a very serious situation. Last night, cheating was discovered that appears to support the OYL Forward candidate for Eastern Region at the AGM this weekend in Richmond Hill.

A fake email address was created to impersonate a Riding Association President. It was used to appoint 3 delegates by sending an email to the AGM's Chief Returning Officer. The Association President has confirmed that this is not his email address, and that he did not appoint these delegates. Like all of us, he is not pleased with how easily and carelessly the people responsible misrepresented themselves using his identity. If this happened once, how many other delegates were appointed fraudulently?

We may all be shocked, but we cannot allow ourselves to be shocked into silence. We as an organization cannot ignore proof of cheating. We must stand up. We deserve better and we can do better.

If you agree with me, please make your voices heard to ensure the integrity of the results of the AGM this weekend.

Furthermore, we ask that the AGM Returning Officer Brian Whitmore (oyl.cro.2010@gmail.com) re-verify all riding association appointees by scan or fax that includes the Riding Association President's selection, signature, and photocopy of ID.

Voice your desire for a fair, open, and accountable Annual General Meeting this weekend.

As Young Liberals in the political system, we learn responsibility quickly, and this is an unfortunate juncture in learning that.

Cheating cannot be tolerated within our commission. Join the fight for a fair, open and transparent Annual General Meeting.

Now, lets take a look at the alleged email sent by the Leeds Grenville Riding president. 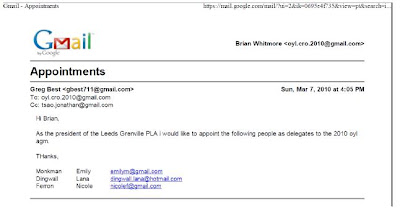 So, there you have it, a gmail account, with numbers used to add delegates. It doesn't look like the email of a riding president who is a lawyer in the Brockville area. In fact, I have been told that this particular person has his secretary do his emailing for him. Here is an email sent by the riding president to the CRO for OYL 2010.

I have had a chance to review the email allegedly sent by me. It is not my email and was not sent by me.

For me this is another reason why we should abolish the slate system in youth politics, it creates a hyper competitive environment where youth scheme up ways to screw over fellow young liberals. People should run on the power of their own campaign rather than as a team. If these teams don't play fair they should be kicked out of the league. Maybe some type of constitutional amendment may be in order, but till then I can complain from my soapbox.

PS: As of 8pm tonight, those 3 delegates have been disqualified.

The system only works if there are people there to make it accountable.
Posted by Jamie Callingham at 7:38 p.m. 8 comments: