It has come to the Globe and Mail's attention that Stephen Harper's continual coalition BS rant is of his own strategy. I have come up with a few coaltions Stephen Harper has been part of. This is by no means a complete list, and if you have any suggestions please send them to me.

Every year Harper jumps on the bandwagon of the last Canadian team left in the playoffs. Remember when he was at the Oilers game 6 vs Carolina. Remember how he suddenly became a habs fan last year? Do you remember, that Harper is like me, a lifelong member of Leafs nation, who resorted to cheering for Ottawa when they made a cup run. This time of bandwagoning coalitioning is bad, especially from a fellow lifelong Leaf fan. I am dissapointed in this, and call on the Prime Minister to only support the Toronto Maple Leafs. No more hockey coalitions Mr. Harper. FOR SHAME! 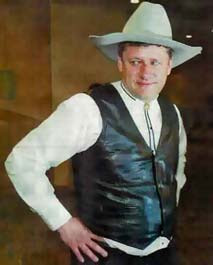 Well, what can we say about this coalition, usually riding motorcycles, or parading in Toronto in late June? This is the most eclectic of Stephen Harper's coalitions. I think this is also the most inclusive. From the Hells angels, to those guys in S&M bars, they are all part of the leather vest coalition which Harper is a proud member. Giddy-up.

Coalition of socialists, separatists and Conservatives
Here, take a look at this letter pasted in here.
THE 2004 LETTER Her Excellency the Right Honourable Adrienne Clarkson, C.C., C.M.M., C.O.M., C.D. Governor General Rideau Hall 1 Sussex Drive Ottawa, Ontario K1A 0A1 EXCELLENCY, As leaders of the opposition parties, we are well aware that, given the Liberal minority government, you could be asked by the Prime Minister to dissolve the 38th Parliament at any time should the House of Commons fail to support some part of the government's program. We respectfully point out that the opposition parties, who together constitute a majority in the House, have been in close consultation. We believe that, should a request for dissolution arise this should give you cause, as constitutional practice has determined, to consult the opposition leaders and consider all of your options before exercising your constitutional authority. Your attention to this matter is appreciated. SINCERELY, Hon. Stephen Harper, P.C., M.P. Leader of the Opposition Leader of the Conservative Party of Canada Gilles Duceppe, M.P. Leader of the Bloc Québécois Jack Layton, M.P. Leader of the New Democratic Party
This is pretty self explanatory, Harper wanted to enter into a coalition with separatists (BQ), and the Socialists (NDP) in 2004. It took him a few years to flip flop back and forth against the coalitions, but lets not let the facts get in the way of a repetitive and stupid stump speech for Stephen on the campaign trail.

Coalition of the willing (war in Iraq) 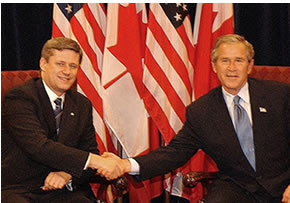 Oh yeah, Stephen Harper was in favour of Canada going to war in Iraq in 2003, remember how well that turned out? Turned into a bit of a quagmire. Stephen wanted to follow his best friend George Bush full bore into the Iraq invasion. History has taught us facebook is a much better way to do regime change in that region.

National Citizens Coalition
Stephen used to be president of this organization in the 1990s. Apparently they are a lobby group that is a coalition of right wingers who wanted to put a firewall up in Alberta or something along those lines. Stephen Harper, President of a Coalition! Gotcha!

So this is a brief history of Stephen Harper and coalitions. He talks about the, but they are littered in his past. Something to think about voters, whenever he goes on and on about the non-existent coalition.

Nice work putting these together...

The biggest coalition Stephen Harper is a part of is the Conservative Party which is a coalition of Progressive Conservatives and Reformers. I think once week one is completed the media will give Ignatieff the edge and from there things will get better.